The Lady in Black

Have you ever had one of those “once in a lifetime opportunities” and when it is all said and done you're like, “damn, that was everything and more” or maybe you thought it was a waste and almost regretted it? Well I had one of those a couple of weekends ago, the good type of trips, except this one was better than I could have imagined it being!

I was able to take in the entire weekend at Darlington Raceway, the “Lady in Black” or the “Track too Tough to Tame,” for the NASCAR crown jewel, the Southern 500. It’s pretty much been a Labor Day mainstay, minus a few years when NASCAR had their proverbial head up their asses and they moved the race to another venue (not saying they still don’t have their heads where the sun don’t shine, but at least they brought this race back) but that’s neither here nor there and can be saved for another conversation. Now, I’m and honest man and taking in this race weekend wasn’t my idea, not even close, it was my Dad’s plan and he has been planning it since February and when he brought it up to me it was something I could never say no to. A little back story, my parents live in Florida and I am currently residing in North Carolina and it’s because of my Dad that I’m into racing as much as I am. He used to crew chief for a driver when he was younger hitting up some of the most notable tracks in the Western Pennsylvania area. When he met and married my Mom, they would take me for as long as I could remember before relocating in Florida. So yeah, when Dad says he wants to go, I’m going to go.

As we all know, no trip will ever be had without any hiccups and this one was absolutely no different. This all started a few weeks ago with a hurricane you may have heard about, Dorian (if you haven’t, what rock do you live under anyway) and the stupid nonstop news coverage [insert storm watching fatigue]. But that was only part of it. The storm also ruined the pleasant surprise of my Mom making the trek with him to join my little clan. I had asked if she was going and she said she couldn’t due to work obligations and the whole time they were telling me that one of his coworkers was going to come. But when the weather looked damning, they told me that she was coming because they were going to have to cut their trip short.

When my Dad said he wanted to make this a weekend trip, he wasn’t kidding. He got practice tickets (free I know), all day Saturday which included Xfinity Series and Monster Energy Cup qualifying, and the Xfinity race itself. And to make this trip even more fantastic was that Dale Jr. was going to race the Xfinity race and have a throwback to one of his dad’s old paint schemes. In case you didn’t know, which I’m sure most of you reading this do know, the Southern 500 weekend is considered NASCAR’s official throwback weekend; talk about amazing tributes and thoughtful throwbacks from the teams that partook in the theme.

With the weekend being a long weekend for me and my wife, our plan was to head out around 1200 and get to the track around 1400 (2pm), but like most things do when we try to take trips, that was all turned on its head when my wife had to go to work for a few hours and then ended up having to stay longer than expected. That definitely threw our timing off and my parents were able to take in two practice sessions whereas we only made the Cup Happy Hour. No complaints though. I was blistering hot and while I don’t complain too much about the heat, I was thankful my family didn’t have to endure much more that day than they did. It was definitely a cool experience nonetheless. Seeing the cars, the teams working on the cars, and just taking in the lay of the land/track. I have been to plenty of tracks in my life but this one is definitely one of a kind.
With Friday’s events over, my parents informed me that due to Dorian that they weren’t going to be able to stay for the weekend as planned. You wanna talk about bummed out! Holy crap my heart hurt for pops. I knew how excited he was and due to things completely out of his control he was going to have to give up his bucket list weekend.

Saturday rolls around and we had some serious decisions to make. Most of which was who wanted to or could spend all day at the track. For one thing, I knew damn well me and pops were up to the task, and surprisingly my wife and oldest said they were all in as well. Cool, that gave my Mom some quality time with my youngest while we did racing shit…win win if you ask me. Qualifying pretty much went off without a hitch. I will say this, I sure wish NASCAR still had the knockout qualifying to make it a bit more interesting. It was cool and all but I definitely think it would have made it better. I was always a fan of it and I think NASCAR was on the right path with it but just like your local tracks, the drivers/teams are their own worst enemies. I get why  NASCAR switched back to single car qualifying but I think they could have at least tried to go back to the original format, before the teams could cool the engines down, before they completely scrapped it.

One of the coolest things I think NBC has done with their coverage of their part of the season is trying to get back to racing roots with their #MyTrackMyRoots program. One of the local tracks reaped the rewards by being able to set up a display of a couple of dirt cars and being a part of the driver intros. Not gonna lie, I was a little more than slightly jealous to see them get to shake hands with Jr. when he was introduced, very freaking cool! Don’t mind the crappy picture, I was sitting about 10 rows from the top of the grandstands and was all of the way cropped in with my phone. Here is my buddy, “Joker Style” Kyle Jenks shaking Jr.’s hand. 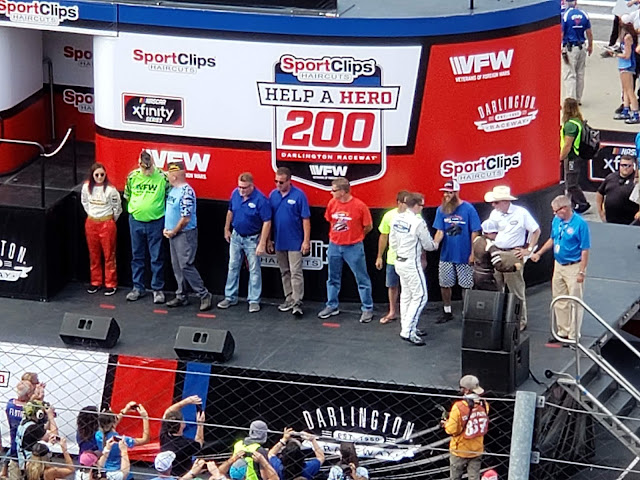 Three big takeaways from the Xfinity race:
It was a great race, probably my second favorite part of the entire weekend, well besides taking it in with my pops.


Did Someone Say Throwback

I don’t know if the theme was just restricted to participants, well for one you should have seen some of the clothes the fans were wearing, but I sure didn’t let the opportunity pass me by…and it was all by chance because of, get this, a rain delay. Let me be perfectly clear here. As a race fan, rain is the debil!!! It never fails to happen exactly when you don’t want it to. But this time was a little different. One, I knew they would try to get the race in pretty much at all costs. Two, I didn’t have a huge vested interest in the event other than spending time with my family which was going to happen one way or another. And three, it’s just a classic race that has to be raced on this particular weekend, IMHO anyway.

Bear with me here. So when my Mom noticed the rain was pretty close to the track, she took my youngest up under the grandstands. Shortly there after I made my way up and met them. Then we go separated because we had to use the restroom and that’s when all hell broke loose. While in the restrooms, the bottom fell out of the sky and pretty much caused all of the fans in the stands for the pre-race activity to flood into the area under the grandstands. I came out of the men’s room and there were soooo many people trying to move around. It was kind of like a school of fish in the water except everyone seemed to be moving in different directions. But I pushed forward trying to make my way back to the women’s restroom to find my Mom and little one. Here is the tricky part, I’m only 5’8” and my Mom is something like 5’2” on a good day so just seeing them was going to be hard. After navigating my way through the crowd I was able to see both of them waiting there for me, pretty smart huh. So I pick up little bit and put her on my shoulders and she was amazed at how many people were crammed in that confined area. We made our way back towards our section where I seat were to hopefully link back up with the rest of the family. Getting there wasn’t that bad but getting to them wasn’t going to be easy. There was a beer stand behind our section and we made it about that far thinking that would be a good place to wait and low and behold there was my wife, Dad, and daughter…but we were separated by about fifteen or so people. I figured, “while in Rome” so I commenced to buy some beer and that’s when the fun started

I’ve learned over the years that the racing family is just that, an extended family, and there just happened to be one cool ass, tipsy, older dude that was standing beside us. That’s when I had the brilliant idea to recreate a Crocodile Dundee scene; you know, the one in the first one towards the end when they are in the subway. Instead of having him holler that I loved her, I asked him to ask if she wanted a beer. And just like that, the guy knew exactly was happening and laughed so hard. It was so funny to him that on his own accord he kept asking her. LOL I can’t say for certain, but I don’t think my family found it as amusing as we did but regardless, it was frickin’ fun! But that isn’t all that happened. As some of you may know, Bubba Wallace and Corey LaJoie have had a history of playing catch with some fans during rain delays and this night was no different. So once it stopped raining, we moved back to our seats, which were only two rows up from the catch fence, and as I got there the football landed right at my feet! Freakin’ awesome to be able to partake in something so trivial. After that was done I ended up having one more trick up my sleeve, I attempted to start a wave while waiting for the track drying to finish up and I was in it to win it to make it happen. I’m sure I made a bit of a fool out of myself but I know for a fact that I pretty much embarrassed my family in the process of having fun. It’s amazing what a little beer and rain can get someone to do!

All-in-all it was an amazing trip and I’m so glad that my parents got to take in the whole weekend and we were able to take it in as a family with them. Now I need to prepare to finish my photography race season strong and it starts this weekend at Virginia Motor Speedway for the Fastrak Racing $50,000 to win World Championship along with the UMP Modifieds Dirt Cup Challenge event that is $6,000 to win and $600 to start.
Posted by JBHotShots at September 11, 2019